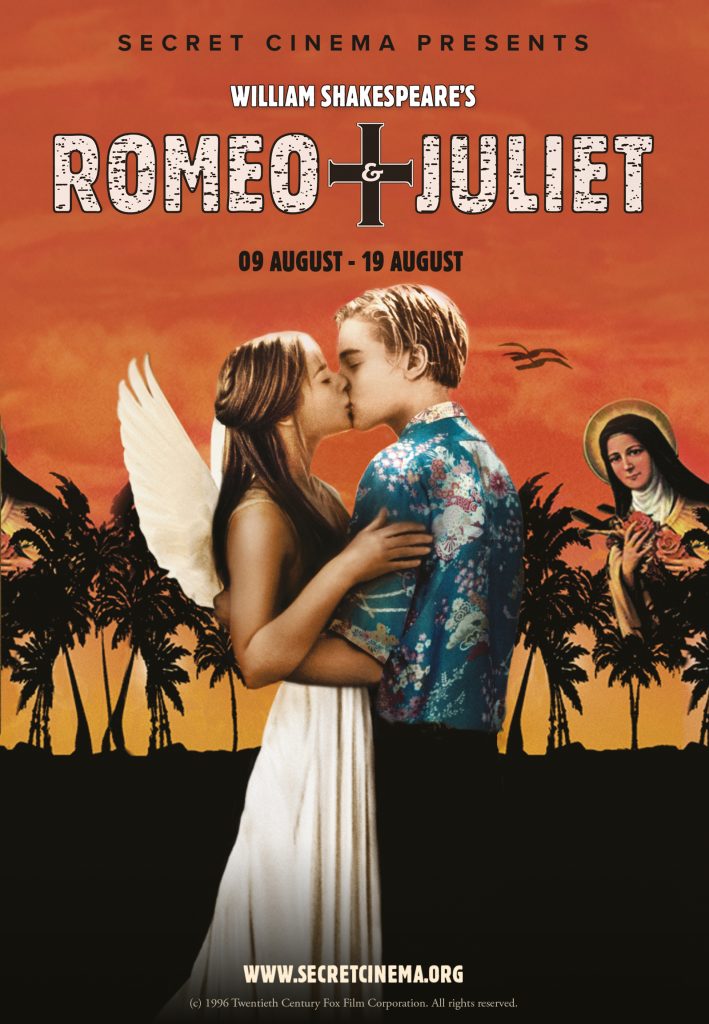 Here’s what the team have revealed so far…

The summer festival will run from August 9th – 19th 2018 and tickets go on sale at 12pm (BST) on Friday 18th May.  Tickets are available at www.secretcinema.org with prices starting at £49 plus booking fees. Show nights are Wednesday to Sunday.

A secret outdoor London location and will be transformed into a spectacular multi-layered world of Verona Beach. This open-air production will be the largest experience Secret Cinema has ever produced, bringing together live bands, DJs, choirs and artists together with an audience of almost 5,000 people taking part in the show every night and up to 50,000 in total over the two weeks.

Secret Cinema Presents William Shakespeare’s Romeo + Juliet will be set against the themes of peace, redemption and salvation, and young hearts of Verona will be summoned to the city on behalf of the brave and noble Captain Prince. All are called to create a truce between the warring houses of Montague and Capulet, all must come to crush a cup of wine in peace.

Audiences will be transported to a world that depicts the iconic and stylised elements of the film and Shakespeare’s story. This playground of performance is separated into a myriad of sprawling sections that will bring light and life to the characters, words and desires of Baz Luhrmann’s world like never before.

Max Alexander, CEO, Secret Cinema comments: “Secret Cinema builds new worlds and then invites audiences to explore them and indeed to help bring those worlds to life blurring the distinction between actor and attendee.  Our unique mix of immersive theatre, movie screening and party is already widely recognised as London’s best night out – extending this into a large scale festival format is a natural direction for us to take where song and dance become central to the experience.”

Fabien Riggall, Secret Cinema Founder & Chief Creative Officer said: “We are excited to launch our summer festival with William Shakespeare’s Romeo + Juliet.  The film depicts  some profoundly important social issues, such as youth violence, that remain as relevant in London today as they did in Shakespeare’s Fair Verona. We will be working with MAC-UK a London mental health youth charity who support young people out in the communities where and when they need it.”

Matthew Bennett, Creative Director on the production, added: “Each night will see thousands of people take part in a carnival of performance expression, a living world of one of the greatest love stories ever told. William Shakespeare’s Romeo + Juliet has epic ingredients with which we can play with: from the legendary characters, the rich back story of families feuding along with all the anthems for the audience to discover and sing across our world.”

Full details and tickets can be found at www.secretcinema.org. Follow the story across social media using the hashtags #YoungHearts and #SecretSummer.

We loved Blade Runner and SC’s other past events – Be sure not to miss out and grab tickets from 12pm tomorrow (BST) at
www.secretcinema.org