Six Great Things About The Upcoming Season Of Community 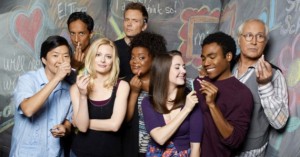 On January 2nd, televisions most meta show, Community, returns for its fifth season. Although it is arguably one of the funniest, quickest, pop-culture reference filled comedies currently on TV, it has struggled in the ratings since day one, and every year it’s fanbase has waited in anticipation to see if it will be renewed for another season. The campaign for #sixseasonsandamovie is getting close to becoming a reality, and after a less than great season four without showrunner Dan Harmon, here are six reasons to be excited about the new season.

After being fired at the end of the third season, Dan Harmon returns this year as showrunner. The fourth season often felt like it was being written by fans desperate to re-create Harmons talent for high-concept storylines and clever meta humour, but the results often fell flat and the laughs didn’t come as quick as before. Hopefully, with the return of Harmon, the show will improve.

2. Donald Glover is leaving. But his last episode will be a great one.

The sad news is that Donald Glover, who plays Troy Barnes, will only feature in five out of the thirteen episodes. This is NOT something to look forward to, but his last episode sounds like it will be one of the shows best. “I just watched the episode where Troy leaves, and it’s heartbreaking,” series creator Dan Harmon told TV Guide recently. “It’s a real Kleenex-boxer. I wrote it, I was there when they shot it, I’m editing it and I’m not even looking at a completed version, and my eyes were running like a faucet.”

After being difficult behind the scenes forever, Chevy Chase will finally be gone for good this season. Will anyone REALLY miss Pierce Hawthorne? Jonathan Banks, best known for his role on Breaking Bad, is joining the cast as a Criminology Professor which more than makes up for Chevy’s absence.

The new promo for the upcoming season takes inspiration from Mad Men featuring mostly nothingness, yet making it seem like every word uttered is the most dramatic and important thing ever.

6. So close to six seasons and a movie. So close.

Pretty impressive for a show that has never been exactly a ratings smash and has often been bounced around the schedules by NBC. Go Community, you can do it!