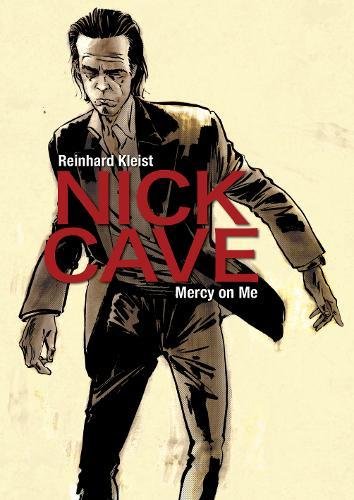 One of SelfMadeHero’s latest releases, Nick Cave ‘Mercy On Me’ is a fascinating portrait of the musician, novelist, poet, actor and all round creative figure of Cave. Written and illustrated by Reinhard Kleist, the book is extensive, following Cave’s adolescence in Australia and the multiple influences which have helped shape the man we all know today.

The book itself has been based on extensive research of Cave including multiple meetings with the the man himself who has endorsed the project. So you truly feel you get a glimpse at a man who’s often seen as something of a shadowy enigma.

We learn all about Cave’s early musical work before his renowned rise with The Bad Seeds. Not to mention the trials and tribulations which follow with Cave’s meteoric rise.

At times Cave’s story can be brutal and Kleist pulls no punches in discussing Cave’s heroin addiction in particular. But Kleist’s writing is captivating along with his artwork which makes the book unforgettable. We get to see a whole new side of the artistic figure learning of his relationship with Anita Lane seen as his muse and inspiration to so much of his work.

The story itself although dark has moments of beauty alongside tragedy. With a subtle comic undertone running throughout. Kleist’s illustrations stunningly fit the story of Cave, with their stark simple, but gorgeous line work which fantastically evoke the dark days of Cave’s career and the dizzying heights of the man playing live. It’s a thought provoking and emotive read and one which will undoubtedly keep Cave fans glued to the page.

Make sure you get your copy today at www.selfmadehero.com