Outburst – A Magnificent tale of Metamorphosis Out on SelfMadeHero

The debut graphic novel from award winning Belgium animator Pieter Coudyzer is as spectacular as you would expect from a man of such talents. Outburst follows the story of Tom, a classic geeky nerd who’s constantly ignored by his classmates, peers and even the object of his desire.

As things grow worse for Tom and he finds himself the brunt of a series of cruel pranks he looks towards nature finding peace within his passion. In doing so, Tom finds himself slowly changing, metamorphosing into something altogether different. 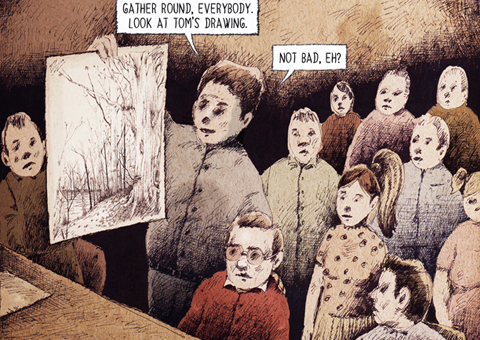 Often disturbing, but beautiful too in equal measure, Outburst is an incredible debut. Coudyzer’s stunning artwork really will leave you speechless. With unexpected dark overtones, the story carries the feel of a twisted fairy tale but with a very grounded story in an everyday setting. With a huge amount of depth it’ll leave you pondering for hours afterwards.
The illustrations are particularly evocative with wonderful depths within the shadowing and paler colour tones.  Coudyzer’s use of subtle shadows is really quite spectacular within such a range of panel styles conjuring a true mood to the story. It’s fair to say you really do get a sense of the bleakness of Tom’s situation. 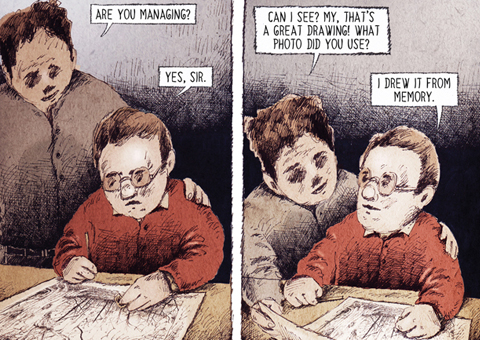 Without wanting to give too much away, the story is richly told with a host of surprises. The panelling offering the chance to indulge in the story with plenty of room for the panels to breathe. 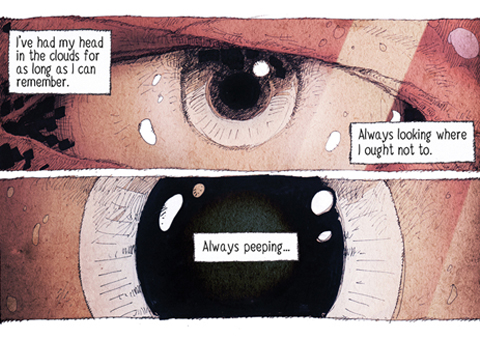 You’ll undoubtedly be hooked until the last panel… you won’t have seen a twist like this before.

A fantastic debut graphic novel from a hugely talented animator. Make sure you get your copy of Outburst today at …..