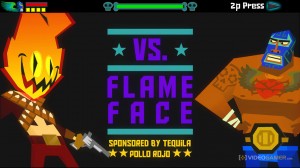 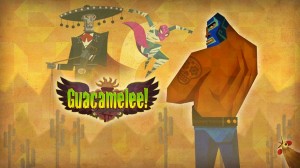 I’m not a violent man, if you challenged me to fight, my only weapons being my sharp wit and I think I have a hockey stick around here somewhere…

I really thought I did…shame, but I’m not one for fighting in real life or in video games, I tried playing Mortal Kombat once, it was not pretty to watch but I had heard good things about Guacamelee so I thought I would roll up my sleeves, get ‘Punchy’ and ‘Fighty’ (The names of my fists) ready and give this a go.

To preface, Guacamelee is a platforming fighting game, set in Mexico, you play a luchador, basically a fancy word for a Mexican wrestler; you are tasked in rescuing your sweetheart from the clutches of ‘Calaca’ some skeleton, demonic guy…basically he’s a bad egg.

You travel from locations helping out the townsfolk with tasks related to punching various things, or kicking other things, or collecting resources. These get you benefits such as more health and power ups, which helps as the game gets harder as you progress, you will be battling skeleton dudes, plant things, annoying bird creatures that shoot at you all of which gets you money to buy upgrades for your abilities.

Now this game is not just punching and kicking, there are also super moves; basically super kicks and punches, but some of them such as ‘Rooster Uppercut’ and ‘Goat Climb’ allow you to reach other areas and are also very useful when fighting enemies too. Along with super powers you can move freely from the land of the living and the dead allowing you to fight certain enemies and access special platforms.

The music in Guacamelee deserves a mention, it’s super repetitive but is almost compulsory when playing, it transports you straight to Mexico; and it’s definitely cheaper than a plane ticket I can tell you that. Along with the music the graphic art style is a bit unusual added to the fact that this is a 2D platforming game really helps to keep things simple while you can concentrate on double jumping, uppercutting and manoeuvering yourself out of danger and onto that tiny ledge just out of reach.

This is a really great game, it has its tongue firmly placed within its cheek and seamlessly blends a platformer and a fighting game; it’s funny, the graphics are unique and I’m struggling to find another game that you can transform into a chicken to fit into smaller gaps. One of the criticisms that I had is that the game it too short, there is a hard mode for when you feel up to it and there is some DLC as well but I would have liked the base game to have a little more longevity.

Guacamelee is a must, while I’m not a violent man, I am an angry luchador. So you’ve been warned!