Prepare to Enter Another World : Tales From The Loop 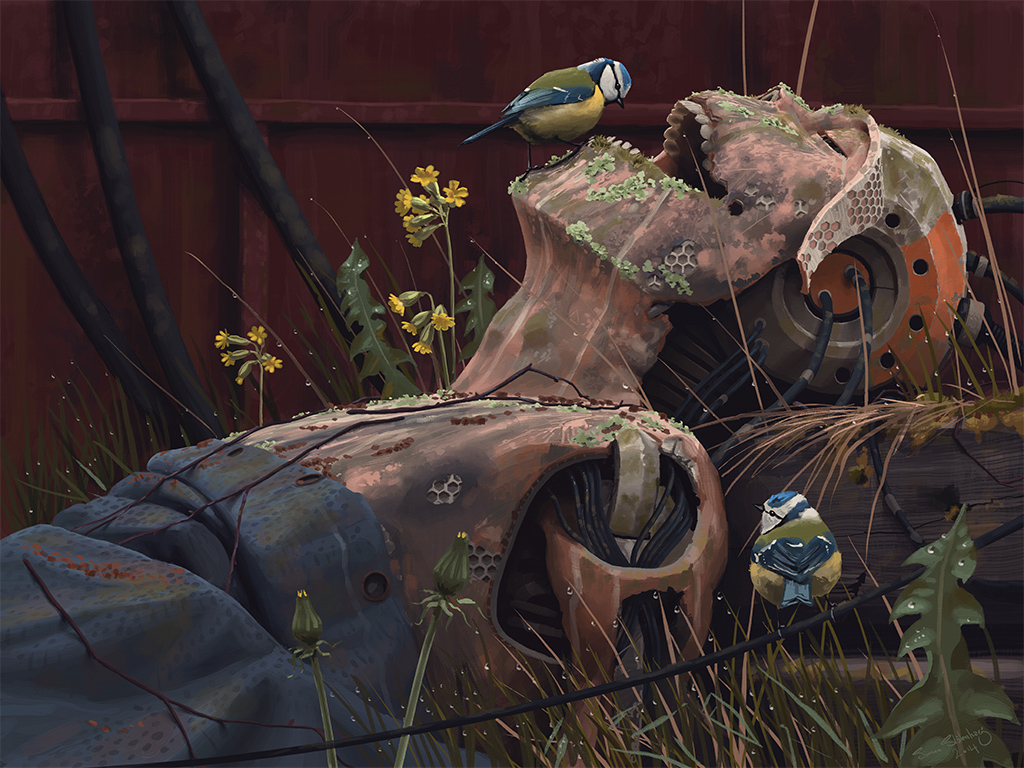 We’re huge fans of RPG games here at GYGO so after hearing about scifi artist Simon Stålenhag’s successful Kickstarter ‘Tales from the Loop’ which told of an alternate reality set in a cool scifi version of the 1980s we simply couldn’t wait to find out all about it!

Initially launched as a Kickstarter campaign in 2016, Illustrator Simon Stålenhag stunning imagery of a dystopian 1980s which never was, quickly gained momentum online and the campaign blazed past it’s targets. Now finally released as a fully realised RPG with custom dice and board we were keen to see how such an epic looking universe came to be. 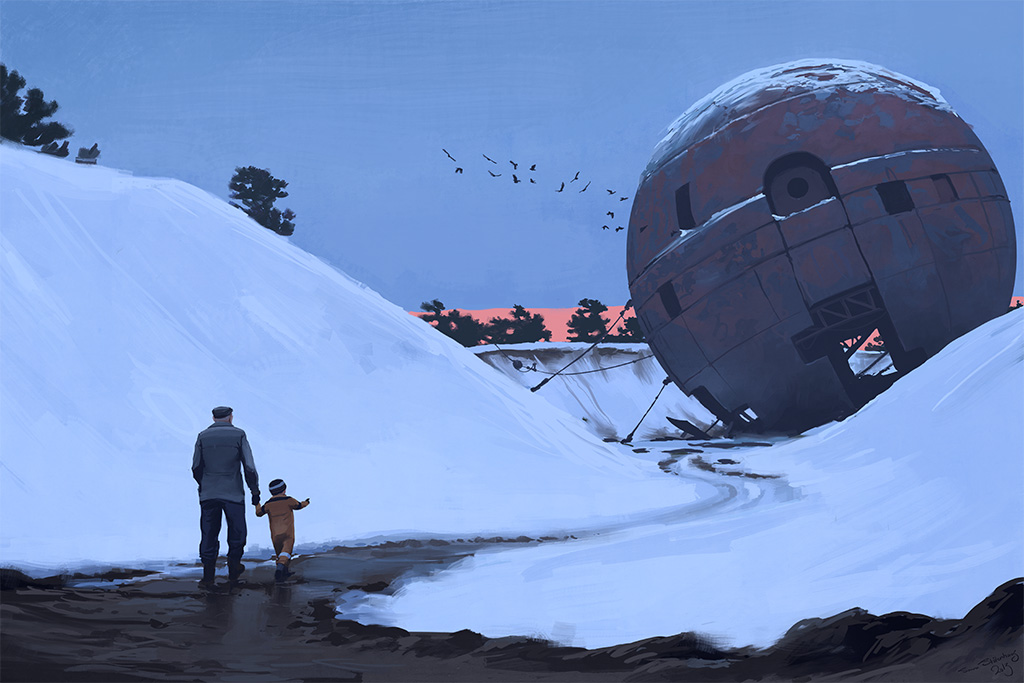 Written by Nils Hintze and the team at Free League (responsible for a host of other cool games including the awesome Mutant: Year Zero and Coriolis – The Third Horizon) the game is an epic journey where you play as one of several 1980s teenagers (Think Stand by me / ET) who’s encounters with strange events around their hometown in Sweden opens up a world of adventure. These characters all follow your classic ‘Breakfast club’ style of trope (e.g. Bookworm, troublemaker, weirdo, etc). The story is incredibly intricate and well through, and there’s some amazing levels of details. For fans of the era and Sci fi it’s a wonderful mashup.

It has to be said first up the illustrations within the rule book are absolutely stunning. There’s a huge range here from the rural landscapes of Sweden incorporating mechanical monsters from other worlds right through to dusty deserts of Nevada where neon lights pulsate. Stålenhag’s work is breathtaking and it’s a joy to be able to go through each picture and soak up the detail. The contrast too between 1980s vehicles and fashion and the ultra futuristic details are awesome. It’s like a crazy mix between ‘Stranger Things’ and ‘Elysium’. We loved it. 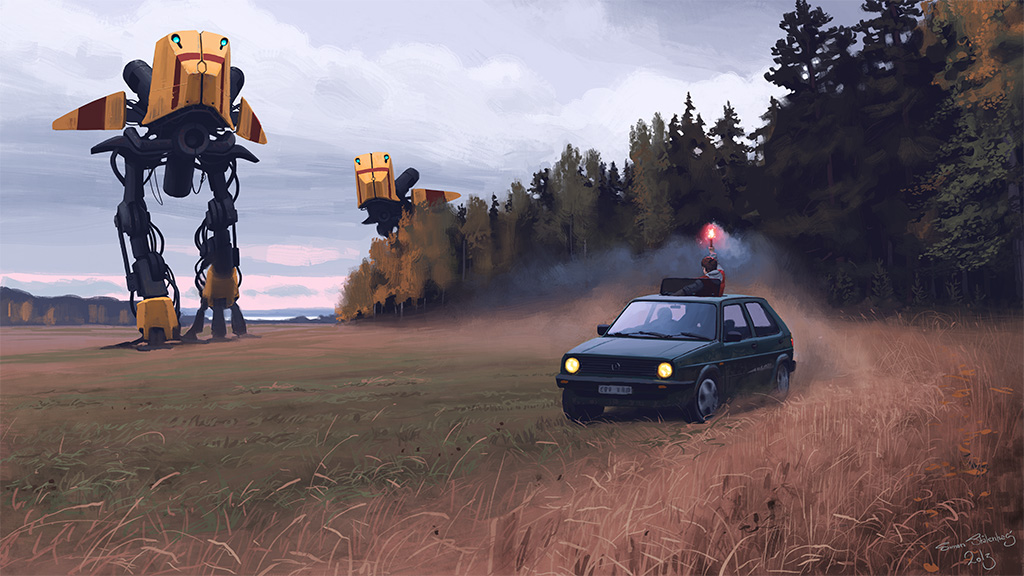 The story itself is primarily around Mälaröarna, a string of islands just west of Stockholm and how this alternate reality came to be. In short ‘The Loop’ which is a huge particle accelerator and evidently how this has affected the timeline we see in the story. In 1950s Sweden the government orders the construction of the world’s largest particle accelerator deep under the countryside of Mälaröarna, this effectively becomes known as ’The Loop’.

The actual game itself is based around a year zero concept – and with one six needed in order to gain success, with the obvious bonuses from additional high rolls. The rulebook shows extensively how this can work with the huge variety of additional bonus scores from other achievements. It’s beautifully put together and has a real feel of the era. You’ll go from dealing with teenage problems such as handling bullies, homework and nagging parents right through to taking on otherworldly monsters. It’s spectacular! 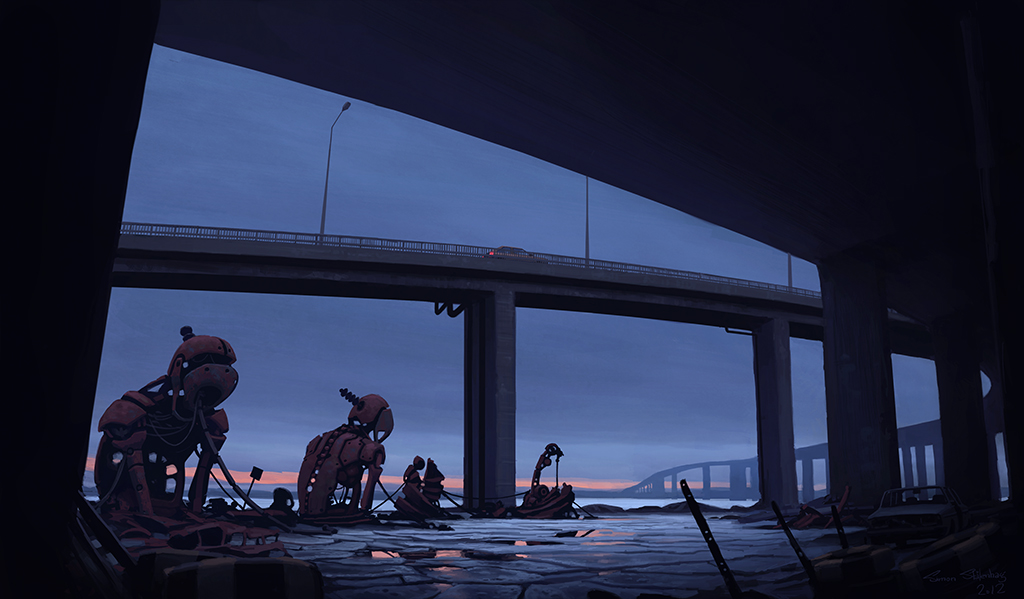 Though primarily based in Mälaröarna the rulebook also. Offers alternative campaign settings in a US location (loosely based on Boulder City, Nevada) which is something really special and totally raises the stakes of the adventure. It’s also great to know that this is written exclusively by the award-winning game writer and author Matt Forbeck.

On top of this we also loved the custom dice, which again are kept in line with the styling of the games. Accompanied with which the actual game board incorporates the wonderful artwork and really puts you in the heart of the action. It makes the experience very special indeed. 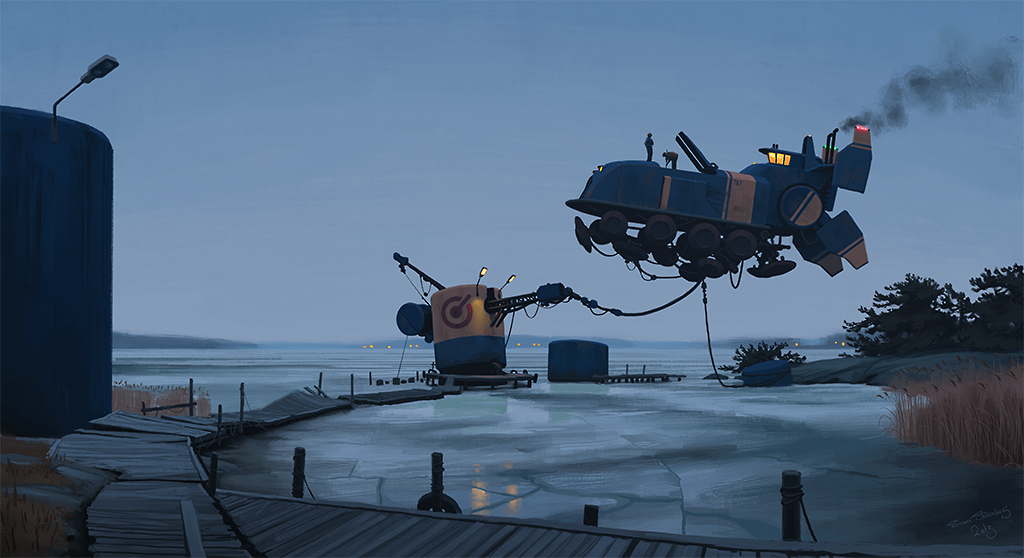 There’s a huge amount at stake within ’TFTL’ and to tell too much would be to spoil it, but we can absolutely assure you, this is a must have for any fans of RPG games and 1980s nostalgia. There’s something here for everyone. If this doesn’t make it to the big screen then we’d be very surprised.