Brimstone tells an entirely different story to the norse epic of F.O.G. This time following the tale of Mary, an orphan from the south of England, who’s world is turned upside down when she finds her grandmother dead, with mysterious instructions to find a long lost relative one which will take her into a realm inhabited by nightmarish creatures and questionable allies.

Without giving too much away, from those early pages the reader follows Mary’s adventures, from the relative mundanity of her suburban life, out to an epic fantasy world inhabited by demons and witches, one which is intricately detailed from page to page. 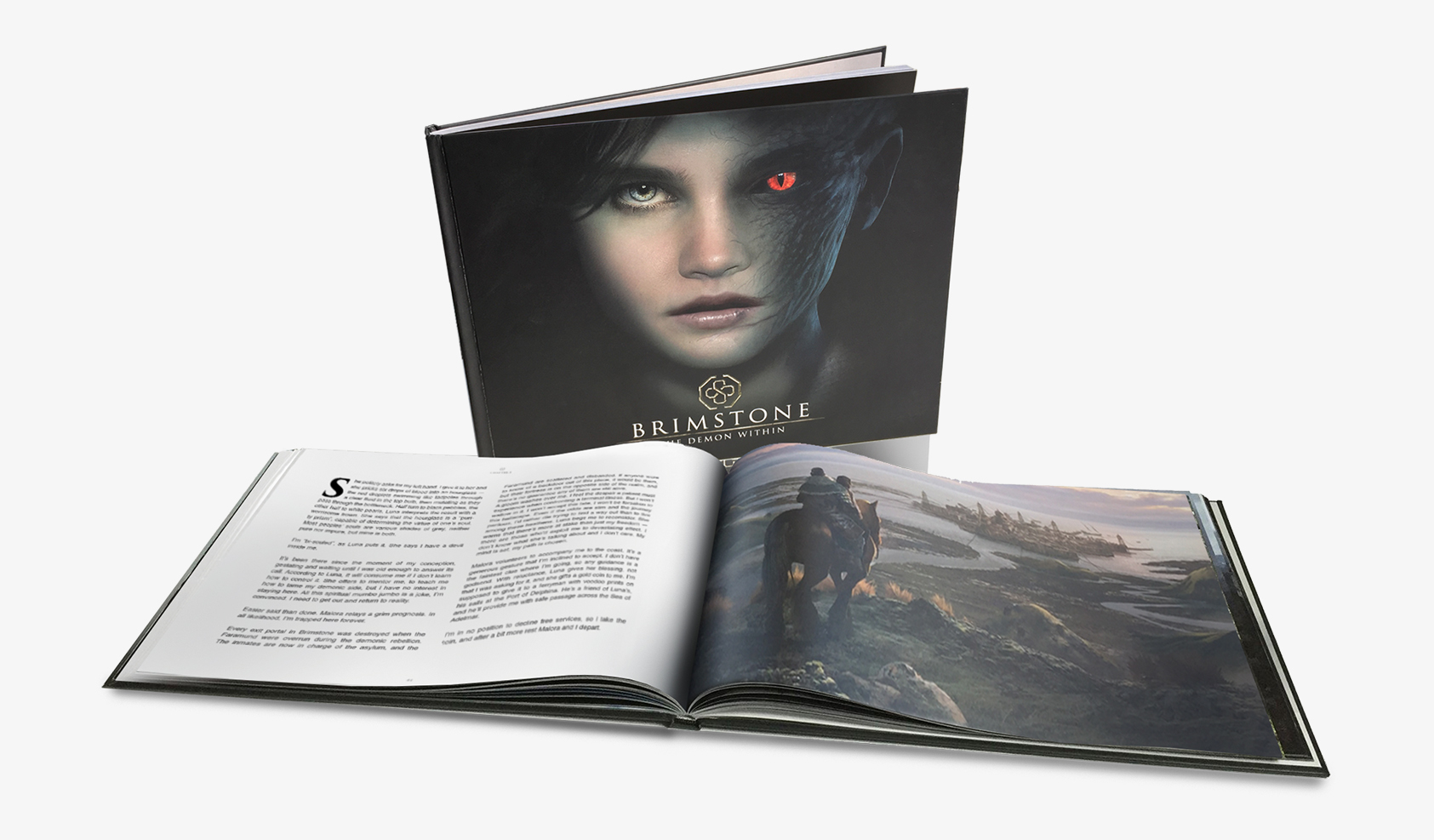 It has to be said first up, Brimstone is stunning – and beautifully printed. From the gold embossed titles on the cover, to the incredibly detailed scenery. If anything the detailing is even more indepth than F.O.G. Some of the battle art pieces are truly spectacular and you’ll spend a huge amount of time just pouring over Mood’s work on the artwork. 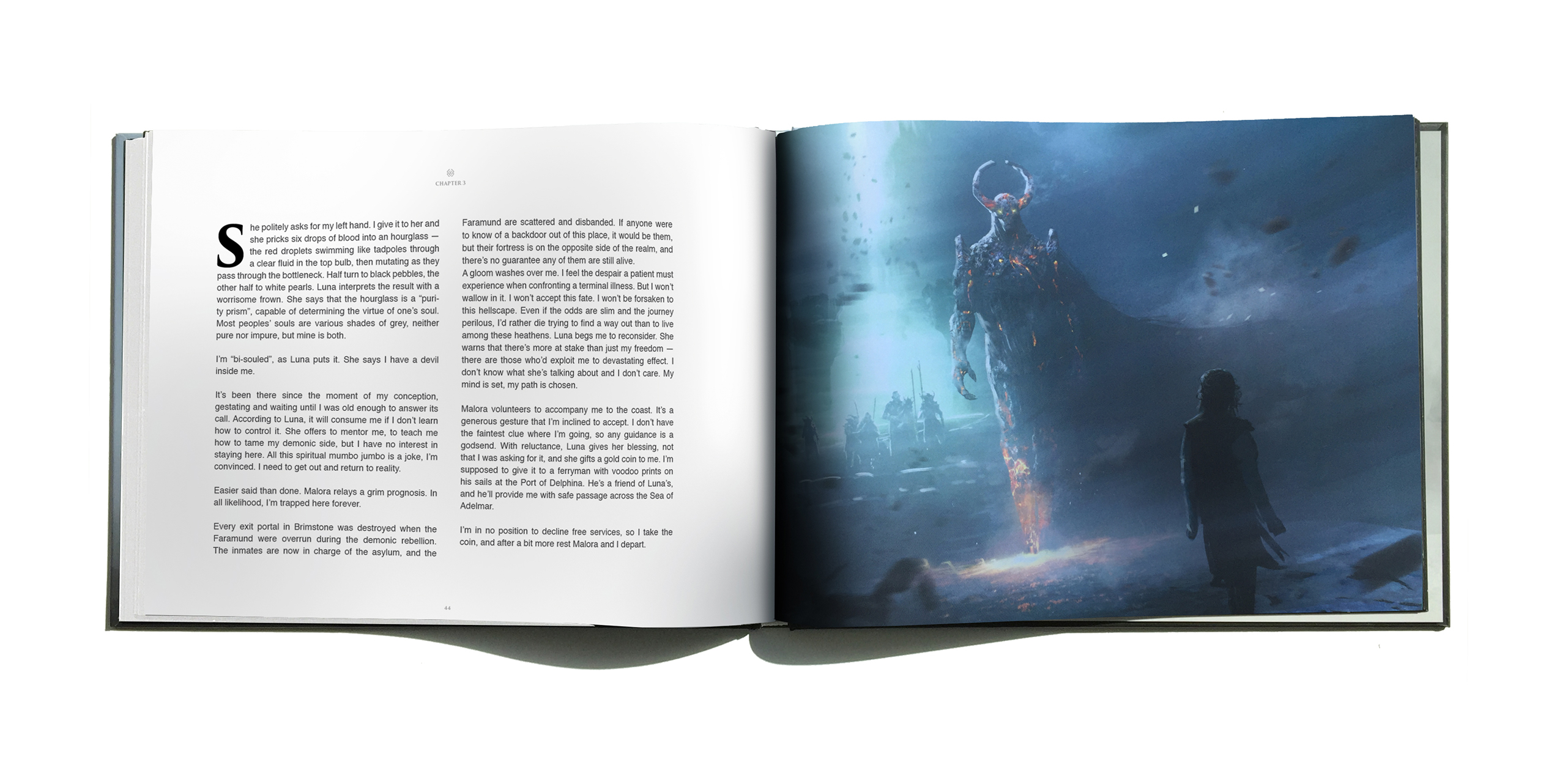 We also loved the unique of the book.  F.O.G.’s cinematic novel style of setup was hugely engaging, with the images following a panoramic style of layout. It really gives the story an even more monumental feeling and keeps you hanging on the edge of your seat to find out what happens next. Will’s story is also really intriguing and the evident contrast between ‘our world’ and the dark world of ‘Brimstone’ really leaps out from the page and kept us hungry for more. It was refreshing to have characters who weren’t quite so clear cut, with multiple agendas which most certainly will keep you guessing as to their true motives.

It’s clear there’s a set up for a much larger story and we’d certainly be more than happy to revisit Brimstone and find out more about the world and Mary’s quest.

This is a sublime follow up to F.O.G. if you were a fan of Mood’s first book or simply want a fantasy adventure which is accompanied by some simply amazing artwork then this is a must.

We were also lucky enough to get a chance to chat to the man behind Mood as well Rasmus Berggreen who was kind enough to chat through some of the team’s work.

Thanks for taking the time to talk to us Rasmus we love your work!

Can you tell us how you initially started within the art world and what really motivates you as an artist?

As a kid i was very fascinated by disney movies. I just couldn’t believe it was possible to come up with such fantastic universes out of pure imagination. I’ve always been drawing and had this dream that some day I would draw Disney movies as well. But I really didn’t think you could make a living out of drawing. Only years later I learned you could go to a design school and evolve as an artist. So I did. Here I found my direction, and got more and more interested in designing for movies and games, and also got it out of my system to do an animation film. That was very fun. At heart I’m a storyteller, and use a lot of time to not only draw but also write. I am mostly motivated by the grand vision and make something that stands out. At MOOD we are always aiming for the highest possible quality, both on the artistic level, as well as in the story telling.

We were huge fans of ‘Fall of Gods’ it was such a refreshing take on the fascinating Norse mythology and a wonderful format for an adventure story. Can you tell us what the sales of the book have been like since the initial Kickstarter project?

We really love the format as well. Fall of Gods was our fist take on mixing the written novel with illustrations on every page – As we completed the book we found we were on to something unique, as it clearly stands out, neither a graphic novel or artbook, but something of its own. We call it a cinematic novel, designed to give you the feeling of motion picture in book form. We have made it our quest to refine this format, and have been working on a new universe called Brimstone, which has been running on kickstarter as well and will be released soon.

We are building a community around our books, and Fall of Gods has been a fantastic start. Since the kickstarter we have been selling in through our own shop at www.moodpublishing.com and are shaping up to get in retail as well. Fall of Gods 2 is in the making and we can’t wait to share more. So overall I think it has been going pretty well.

How long would you say it takes you and the Mood team on average to create one of the amazing images we can see in your books?

Our images are based on a strong collaborative process, where we help each other reach the quality and consistency. We love being in dialogue, and we feel this ensures great storytelling in the images, as well as a high degree of finish. It varies a lot how long time one image takes to make. Some a more simple, with less environment and characters, some are full blown action shots like this city attacked by a monstrous tortoise-like creature. I will say our images take between 2-5 days to make, depending on the image’s requirements. We storyboarded the whole book before starting the actual illustration part, as to be sure we communicated the story well enough.

We also hear there’s a movie in the works for Fall of Gods- can you tell us anything about this?

Yes, that’s true. Stuart Beattie (Pirates of the Caribbean, collateral) is writing the script and Wes Ball (Maze runner trilogy) is attached to direct, with 20th century Fox as the studio behind it. It’s a super strong team, and hopefully we will see it come alive on the big screen some day – That would be magical. At this stage I can’t reveal much, but I promise to update as soon as there are news to share.

Can we look forward to future Fall of Gods related stories to come?

As briefly mentioned we are working on the sequel. It is such a rich universe, and we cant wait to bring it to the world. As the first one was very inspired by westerns, with a local plot taking place, this time the world is opening up making the conflict between the Jotnar and the humans the central point. Our hero will face the biggest challenges so far as his quest takes him north to find the mysterious witch – The Hyndla – who might be able to bring back his dead wife from the lifetree Yggdrasil.

Brimstone looks absolutely stunning and an incredible follow up to Fall of Gods. Can you give us an insight into the story and how the concept came about?

Imagine a place to which all evil creatures have been banished – This is Brimstone, a beautiful and treacherous realm shadowed by a never ending eclipse. A young girl, Mary, accidentally stumbles into this world and is soon hunted by an ancient evil, The Gorgon, seeking to absorb her to once again be able to return to our world. But she also learns she has a secret that is revealed in Brimstone, a secret that could rip her of her humanity. During working on Fall of Gods, we met Will Simmons, a hollywood screenwriter. He pitched the original concept to us, and we were on board. With him we formed the world and story, and turned it into a new cinematic novel in the lines of our previous book. We love the result, with even more pages, more story and more high quality illustrations. Will is such a talented writer and we have loved working with him on this project.

Can you give us any previews as to what you’re working on at present?

As a studio we work on some really cool big projects, both games and movies. We regular showcase some of that work on our website or artstation. (https://www.artstation.com/artist/mood) On our own worlds we are working on Fall of Gods 2, and a new sci-fi universe that we are really excited about.

For anyone keen to follow your studio work what’s the best way for them to do so?

A good place to follow us would be on facebook, or through our newsletters. You can find links below.