The consumer market has undoubtedly seen a surge in cutting edge tech that’s ever president in our home electronics. Never has this been more prevalent than with the gadgets we rely upon weekly to help with our domestic chores. It’s fair to say Russell Hobbs are at the forefront of this rise and that’s why we when the opportunity arose for us to check out several of Russell Hobbs incredible range of irons we leapt at it. A range which promised to make this mundane task far more effective than the average iron. We simply couldn’t wait to find out. 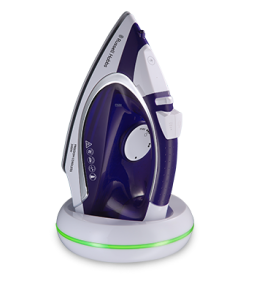 First up we had a chance to get a hands on review of the Freedom Cordless, a revolutionary iron which removes the whole hassle of easily tangled power cords. Instead this iron is powered direct by the Smart light Ring which also offers a means of standing the iron wherever suits you best. With just a five second recharge time (indicated by the lights on the smart ring base) we could easily monitor as and when the iron was ready to go. Hugely helpful and such an easy way to get started!

This incredible iron has a menagerie of features including being able to steam iron in just 30 seconds with a 5 seconds fast re- charge. We were intrigued to see if the iron could really live up to its promise – we needn’t had doubted for a second. Making short work of denim, thick cloth ( including curtains) the iron blazed through all of them. We were also really impressed with its continuous steam function which truly held its own. It’s also easily viewable for refills from it’s transparent water tank which we found hugely useful. 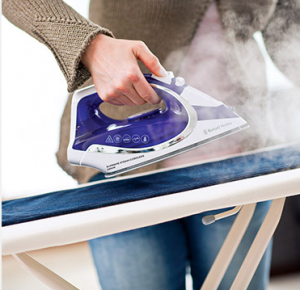 The steam control was excellent, and notably effective against fabrics (we’re told the steam is up to 135g!). Accompanied by the fact that you can vertically steam which was hugely effective against vertical hanging clothes.On top of which the Russell Hobbs standard ceramic soleplate really did impress us cutting through some heavy duty fabrics needless to say especially helpful when you’ve a stack of heavy garments to get through.

As a first for us we found the freedom of having a cordless iron extremely gratifying. No more getting tangled up in power cords or having to adjust your iron board. by simply following the irons base light indicators it made things easy for heating up and monitoring when you were ready to go. 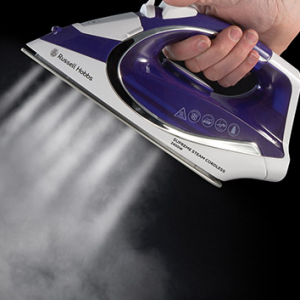 All in this was a hugely effective iron which did exactly what it promised – in a sleek aesthetic. Highly recommended 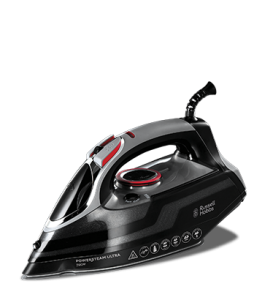 Next up we had a chance to check out the 20630 PowerSteam Ultra – an iron which could be clearly labelled a Ferrari in its class. With a stunning sleek design the Powersteam promised fast heat up times ( up to 15% in fact) with its incredible 3100 watt heat source. Accompanied with the token ceramic sole plate prevalent in all the R&H models we tested which is said making presses garments making them up to 50% smoother. Keen to put both to the test we threw a host of heavy and ruffled fabrics at the PowerSteam.  Amazingly the iron breezed through them all. The speed of the iron’s heating was simply incredible and we were taken aback by the lack of waiting time after refilling. 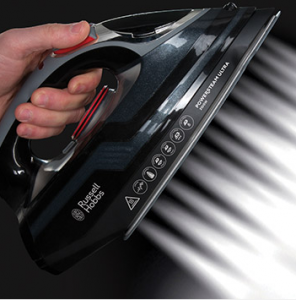 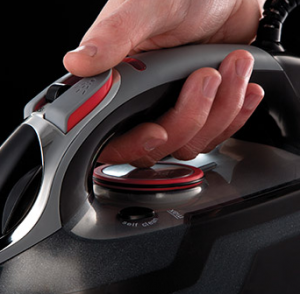 The aesthetics of the iron actually show a lot of functionality, with the iron’s tapered tip (with accompanied button grooves) allowing you to get into those awkward areas on clothes (especially around buttons). This was very helpful and really made short work of ironing jeans and cardigans.

We also had a chance to check out the Powersteam’s powerful steam functioning (which carries a monstrous 210g burst of steam!). Again this made ironing jeans and heavy fabrics phenomenally quick and simple. As with the Freedom Cordless vertical steaming is also possible, making steaming hanging clothes a quick and pain free task. 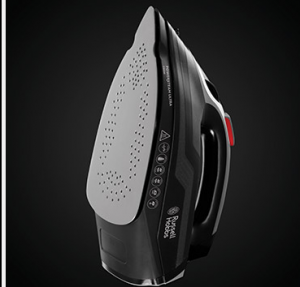 One element we particularly liked was the iron’s triple cleaning action. This in effect is an anti-scale cartridge which is said to help self clean and prevent the build up of scale which as anyone knows can cause serious damage to irons.

Though corded unlike the Freedom Cordless, the PowerSteam’s advantages in its high heat and steam abilities make it a truly incredible piece of kit. On top of which it has to be said it looks stunning. 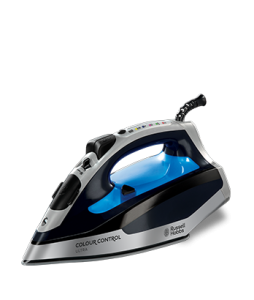 Lastly we got a chance to check out the 21022 Colour Control. This iron stands apart from R&Hs other models with its unique digital colour temperature indicator, making it incredibly simple to both choose and then find the ideal temperature for whatever you’re ironing. Especially quick and easy for changing between fabrics too as we found out to our surprise.

This is welcome peace of mind for pressing delicate garments. It should be said this is coupled with a vast array of settings and vertical steam options. The Easy Temp control was particularly impressive which offered a simple push button operation on the iron’s handle which allowed for colour detection of the selected setting. Something which is especially convenient if you’re pushed for time and need to get through a large amount of ironing. 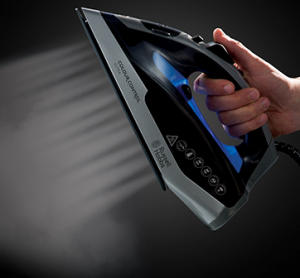 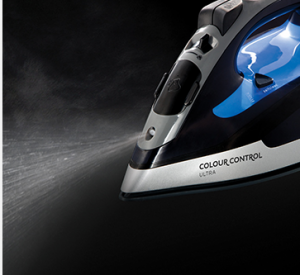 Again with such promises we wondered if the iron could live up to its promised and we needn’t have worried. As with the PowerSteam and Freedom Cordless the Colour Control did exactly what it promised and so much more. We were particularly taken with the the anti shut off functionality. 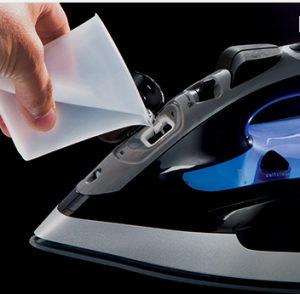 A reassuring feature  automatically which turns off your iron when not in use or even knocked off an ironing board. On top of which the iron’s continuous steam function (45g) again ensured we could push ahead with stacks of clothes to test.

This coupled with the anti drip system was a handy extra, to avoid spilling water when refilling the iron’s water tank system. As with both the Freedom Cordless and PowerSteam the ceramic sole plate easily takes on the toughest of fabrics and we were really impressed with how quickly it pressed heavy duty cloth.

We absolutely loved testing the PowerSteam, Colour Control and Freedom Cordless – all of which carried some fantastic functionality over other iron’s we’ve tried in the past. Accompanied with some stunning aesthetics and incredibly impressive new tech. If you’re looking for a new iron there’s undoubtedly something for everyone at Russell Hobbs.

To find out more about Russell Hobbs and their extensive range of irons please visit: