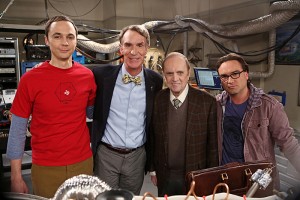 The Big Bang Theory returned to our screens again this week with an all new episode entitled The Proton Displacement. This is the seventh episode of the seventh series; hard to believe the show is been going for as long as it has and still attracting the viewing figures is does, for this American comedy that is centred around a couple of science geeks. It seems the intelligence of the show hasn’t put people off tuning in each week to find out what antics Sheldon and company get up to next.

Joining the main gang this week was Bob Newhart, who was reprising his role as Professor Arthur Proton. He wanted to gain acknowledgement of his scientific career rather than just being an actor off a television show. (That’s the character, not the actor.) His role this time round seemed less forced and reminded viewers why he is a much beloved actor, instead of playing off laughs and jokes from the other actors who spoon fed it to him last time.

The main theme of the episode centred on jealousy with both Sheldon and Raj at the focus. Sheldon firstly, is jealous of Leonard being offered to help Professor Proton, instead of himself. He feels left out and spends the episode trying to make Leonard and Proton jealous. Proton like many outside the core group of characters questions Leonard and Sheldon’s relationship to which Leonard replies that he needs Sheldon as much as Sheldon needs him. It’s a touching moment and moments like these are what allow audiences to build bonds with these characters.

Then there’s Raj who is jealous of Howard for spoiling his evening with the girls. Raj feels he needs to spend time with the girls in order to express his feelings as they won’t judge or mock him like Howard often does. It brings the bond between Howard and Raj closer that even Amy fears the two men will have sex before she and Sheldon do.

There are a number of homosexual references played throughout this episode, firstly with Raj wanting to hang out with the girls on a girl’s night making jewellery rather than spending time with the men. Then as the episode closes to comes to light that Raj has made two lightsaber belt buckles for Howard and himself, so they play together, almost as if they are playing with their penises. Is Raj gay or just idiotic? Will we ever find out?

The girls were side-lined this episode, purely there to guide the male characters into their related storylines, but Penny still managed to get a few laughs as her portrayed dumb blonde character struggles to get glue off her hands. It reminds the viewers than not everyone is a scientific genius and almost gives the show some normality.

It’s ironic that a show about a group of scientists and Penny is as popular as it is, especially when the scientific characters are generally portrayed as geeky. Do audiences enjoy watching something that challenges their minds or is geeky finally cool?