‘The Strain’ is coming to television! Here’s why you should be excited. 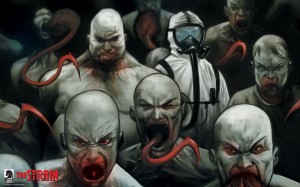 Viewers watching The Walking Dead’s mid-season finale in America were treated to a strange, 32 second advert. The creepy trailer showed a young couple on a date at a restaurant, who were interrupted by the screams of fellow diners as they spotted a mass of rats on the sidewalk. A video camera then followed the trail of rats inside a building. If you watch closely, the phrase ‘He is here’ flashes breifly across the screen about halfway through. Everyone was left pretty perplexed by what on earth they had just seen advertised, but it was later revealed that this was the first piece of viral marketing for FX’s new television show The Strain.

Vampires have been done to death in television and movies, but there are no immortal, good looking high school students fighting teenage werewolves here – this is a straight up thriller/horror. Think The Walking Dead, but replace the zombies with parasitic vampires. The show, set to premiere in July 2014, is from Guillermo del Toro (Pan’s Labyrinth, Hellboy), Carlton Cuse (Lost) and American author Chuck Hogan, and is based on the trilogy of books written by del Toro and Hogan. (Which has also been given a comic book adaption). The series follows Dr. Ephraim Goodweather as the head of the Centre for Disease Control Canary Team in New York who investigates a viral outbreak related to a strain of vampirism. Former professor and Holocaust survivor Abraham Setrakian holds answers, and Eph, son Zac and a team of fighters struggle to survive and save the city as the infection rapidly spreads. With an interesting take on vampire biology, nerve-wracking tension, and a cast of well-rounded, diverse characters with tons of fascinating backstory, the novels will make for a very enjoyable television show indeed, with Del Toro having first envisioned the story as a television series.

The cast currently includes Corey Stoll (House of Cards), Mia Maestro (Twilight), Robert Mailet (Haven), Kevin Durand (Lost) , Sean Astin (Lord of the Rings), Miguel Gomez, Jonathan Hyde (Spooks) and David Bradley (Harry Potter). FX recently ordered 13 episodes with del Toro having already said he has scripted the entire first season and the FX chief mentioning it would be a firm series with 39 to 65 episodes overall. Del Toro is scripting the pilot, with Carlton Cuse acting as showrunner as the show moves forward. As this early marketing suggests, FX is very excited about their new show, and with good reason.