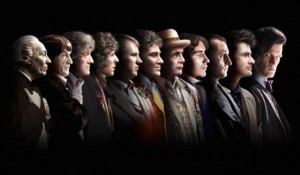 If you cannot tell I’m excited…

The long awaited time has come; 50 years have passed since it began way back in 1963 and now in 2013 we celebrate the time travelling alien with an hour special full of secrets, surprises and enough doctors to set up a small hospital. If you don’t know about Doctor Who then you should be shot with a sonic screwdriver and have a cupboard assembled at you; and you won’t understand that reference then you’ll have to live with not knowing what it means…that’ll teach you, you non-Doctor-Who-watching-sad-excuse-for-a-geek; I’ll assume you’ve now gone off to watch the show since you feel a deep burn from that scathing insult, serves you right too.

The 50th episode sees the return of David Tennant, the reveal of the War Doctor played amazingly by John Hurt and the incumbent Matt Smith, a trio of brilliant actors playing off each other in a story so filled with loops, and confusing time travel that it will cause at the very least a brain haemorrhage, good job there are three doctors present.

Now I’m not going to give the plot away, mainly because it would take me far too long to explain and I’m not really sure what happened anyway. Key things I did take away from this, John Hurt is ‘da bomb.’ (Is that how you say it? I’m not too down with kids these days.) Having three doctors is definitely better than one, like most things three is better than one; unless you have a hungry tiger, or a mouldy loaf of bread, those things definitely are better as a one. I am still far too excited for Doctor who coming back at Christmas, in the episode last week we caught a glimpse of Peter Capaldi who will begin his term as the doctor on Christmas day, literally we only see his eyes, and just a half a second of his eyes made me a my partner squeal like and clap like children.

The other reason that I don’t want to divulge any info is that you should really watch it yourself. If you have not watched Doctor Who before then please refer to my earlier comment; but that aside then the 50th episode is a great place to start, it’ll tee you up for the Christmas special and the start of Peter Capaldi’s term, and then you can start from then onwards and the Doctor Who fans or ‘Whovians’ will welcome you with open arms. If you like it that much then there is over 230 episodes and a feature film to sink your teeth into. If you start watching now then if you put your life aside and watch them all back to back then you should see daylight again in a few weeks time.  I’ll see you then with a recap of the recent news and a bowl of fish fingers and custard; you’ll understand when I see you then!